At the end of April, Voler Factory Racing spent a week competing against some of the nation's best road teams at the Redlands Classic. Team rider Cole Davis had a superb week, standing on multiple podiums, in what was his first time back at the race since 2019. Read on for a glimpse into his race experience.

Returning to Redlands after a three-year hiatus brings back a lot of emotions. This event hosts five stages across five days. Last time I raced here, we experienced both incredible lows and soaring highs. This was my first year competing in Redlands with Voler, and I was ecstatic to see our roster: John Borstelmann, Brad Wiggs, Greg Vanderpool, Caleb Bender, Gavin Hlady.

It was a diverse group of guys, but each one of us brought our own flair to the team and made it an exciting week.

The day before the opening stage, we had a meeting about the course and what everyone’s ambitions were for the day. John asked me who I thought the favorite was. I answered, “I believe I am, but the rest of the peloton thinks Tyler Stites or Tyler Williams, which is perfect for us.” With nobody considering us as contenders for the stage, we had no reason to ride the front and chase down attacks.

The first stage was the Highlands Circuit: 20 laps on a 2.7-mile circuit with a descent, a set of technical, high-speed corners, and a one-minute climb to the finish.

As we expected, the big teams controlled the race for the first 19 laps, but they all seemed to become disorganized on the final lap as we darted through the turns in the neighborhood. With no lead-out trains left, I found myself in the front a couple hundred meters earlier than what would have been ideal. I swung to the right to avoid being swarmed and slowly increased my effort until I jumped behind another rider who opened up their sprint too early and used that as my lead-out. In the end, it came down to a photo finish between me and Tyler Stites. After an uneasy 10-15 minute cooldown spin, I finally received the news that we had won the stage. What a way to start the week! 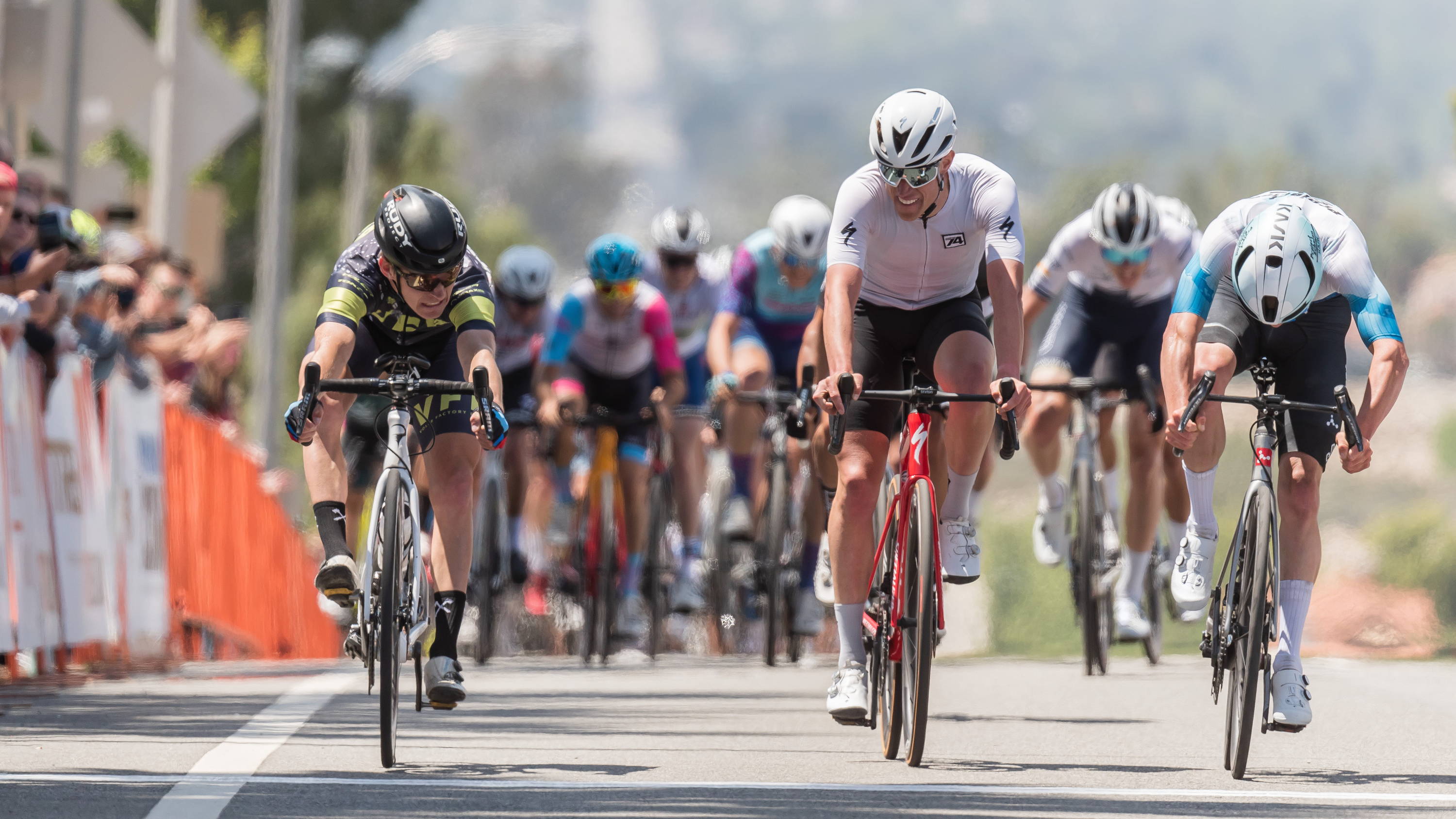 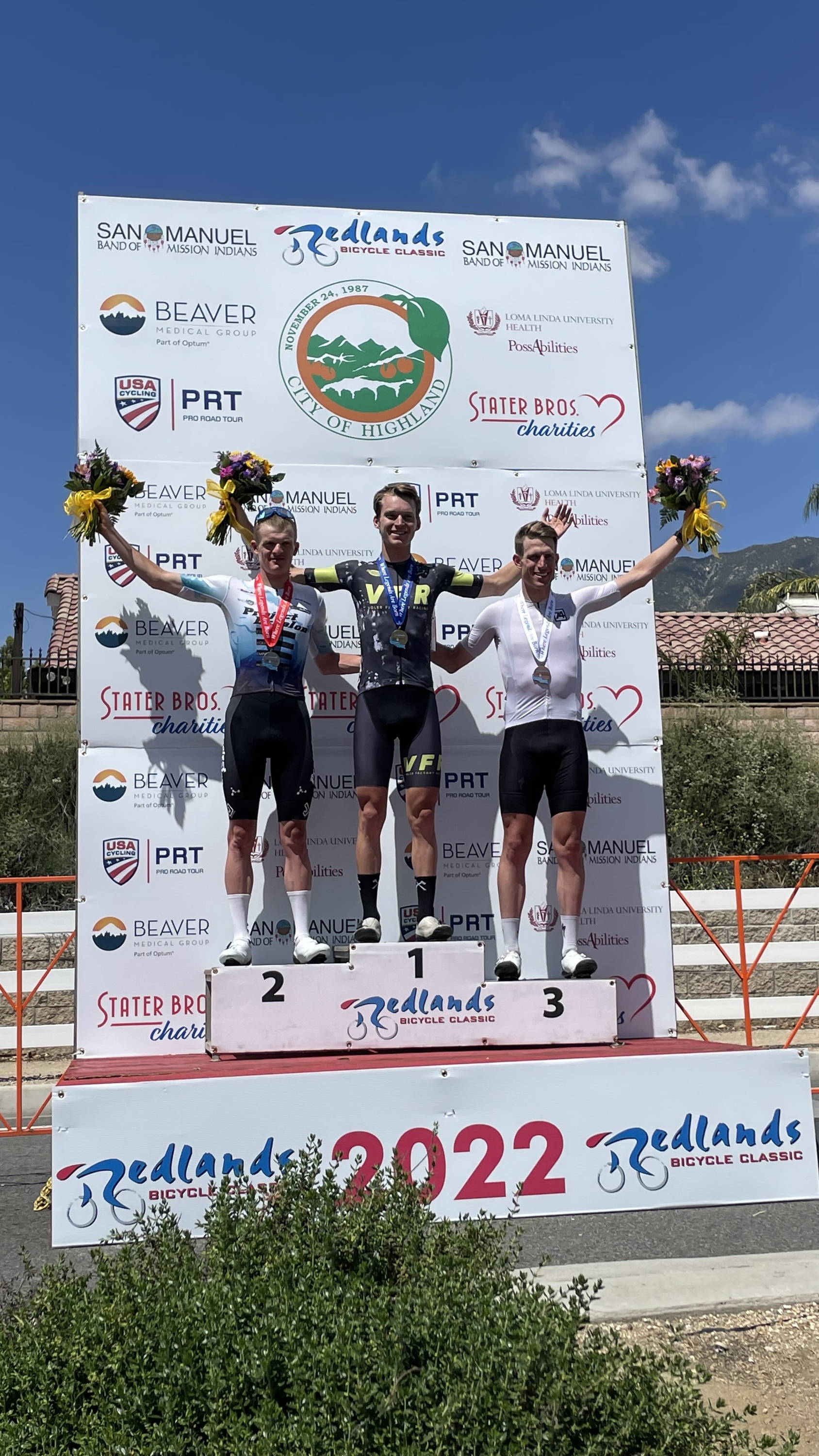 Stage 2 finished up the infamous Oak Glen climb. This day always plays a massive role in the overall general classification (GC) for the week. The stage was relatively straightforward, other than a mid-race stop for 20-30 minutes in the final hour and a half of the stage to address issues on the course. This break provided a new challenge that I had not trained for: how much food and liquid should be consumed when you stop riding and know you will resume, but not when? I tried to not stuff my face despite the temptation. When the race resumed, we did 2 laps of the circuit before taking the left turn up Oak Glen. As the effort continued to increase, so did the pain in my upper stomach. I am not sure if that resulted from too much or too little food consumed during the break. It was not my best effort, but certainly not a bad one. I was 9th on the day, and the rest of the team finished strong as well.

There is not much to be said about the time trial on the third day. Time trials are typically looked at as an individual effort, but after borrowing Caleb’s disc, Brad’s front wheel, and John’s mechanical skills, it felt nothing like that. We all rode fairly well, but not stellar—nothing to write home about! 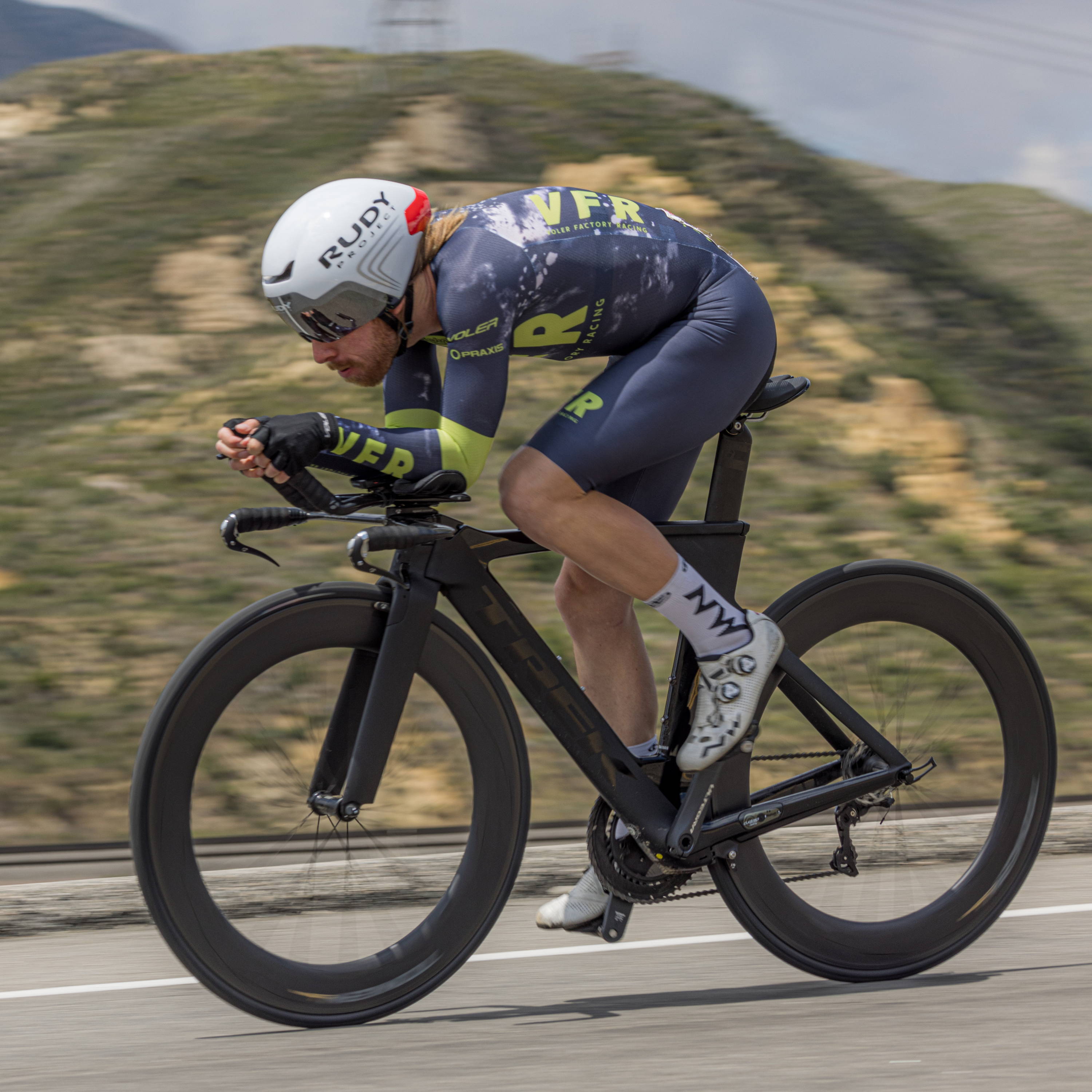 Stage 4 was the criterium in downtown Redlands. The course is short and has 9 turns, making it incredibly technical and even dangerous at times. In the team meeting, we decided the plan would be for most of the team to sit at the back where it was smooth and safe and save their legs for the final day. Meanwhile, Greg and I would fight to stay up at the front and go for a result while protecting my spot in the GC. In the final lap, I took a corner far too cautiously and lost a lot of positions. I ended up 6th, but the highlight was Greg and I each snagging some large primes in the final 10 laps. Everyone from the team finished safely.

The 5th and final stage is the Sunset Road Race. The route begins with a few laps on the criterium course before heading up to the famous Sunset circuit. After 12 laps on a technical circuit course with plenty of pinch points and constantly undulating terrain, the riders head back down for 5 more laps of the crit course. It is the closest thing in America to a European course. In the most recent edition before this year, only 35 riders made it to the finish.

In our team meeting, we decided that the goal was to have John and me attack over the top of each other. In doing so, we could allow the other to have the luxury of being able to sit on other attacks and ideally get a free ride across to the front group. The rest of the team’s role was to try and finish the stage and assist me if I needed it to help me hold my top 10 spot in GC.

If I have learned anything about bike racing in the past 10 years, it is that nothing ever goes exactly as planned. I was reminded of this less than 10 seconds into the stage when I and two other riders in the top 10 overall were involved in a crash. I was the lucky one that didn’t hit the pavement. However, my rear wheel locked up and came to a skidding stop. On looking back, I realized that another rider had his arm/hand mangled in between my frame, spokes, and brake rotor.

Lesson #2, never assume that you know the rules or what the race director will do. I took my time trying to gingerly remove the rider’s hand without creating more pain. After that I got my chain on and began riding a tempo pace because I felt fully confident that the race would get neutralized after the opening crit laps were completed. I quickly realized that was not the case and began to panic, chasing with 1 other rider. By the time we left the crit course, the caravan was too far ahead for us to be able to use them to help us rejoin the peloton. After half an hour of chasing, our hope began diminishing. But right as our motivation was hitting rock bottom, we caught sight of Brad up the road. When we joined Brad, it felt like we had a new life. 3 riders are a lot more than 2 percentage-wise, especially when you have someone as selfless as Brad; he will dig himself into a deep hole to help a teammate. Brad sacrificed his day for me, which gave me the motivation to keep digging when I found myself alone 50 minutes into the chase. 25 minutes later, I finally made contact with the peloton again. The field was already greatly reduced, and when I did not see John in the bunch, I knew it could only mean one thing: he made it into the breakaway! 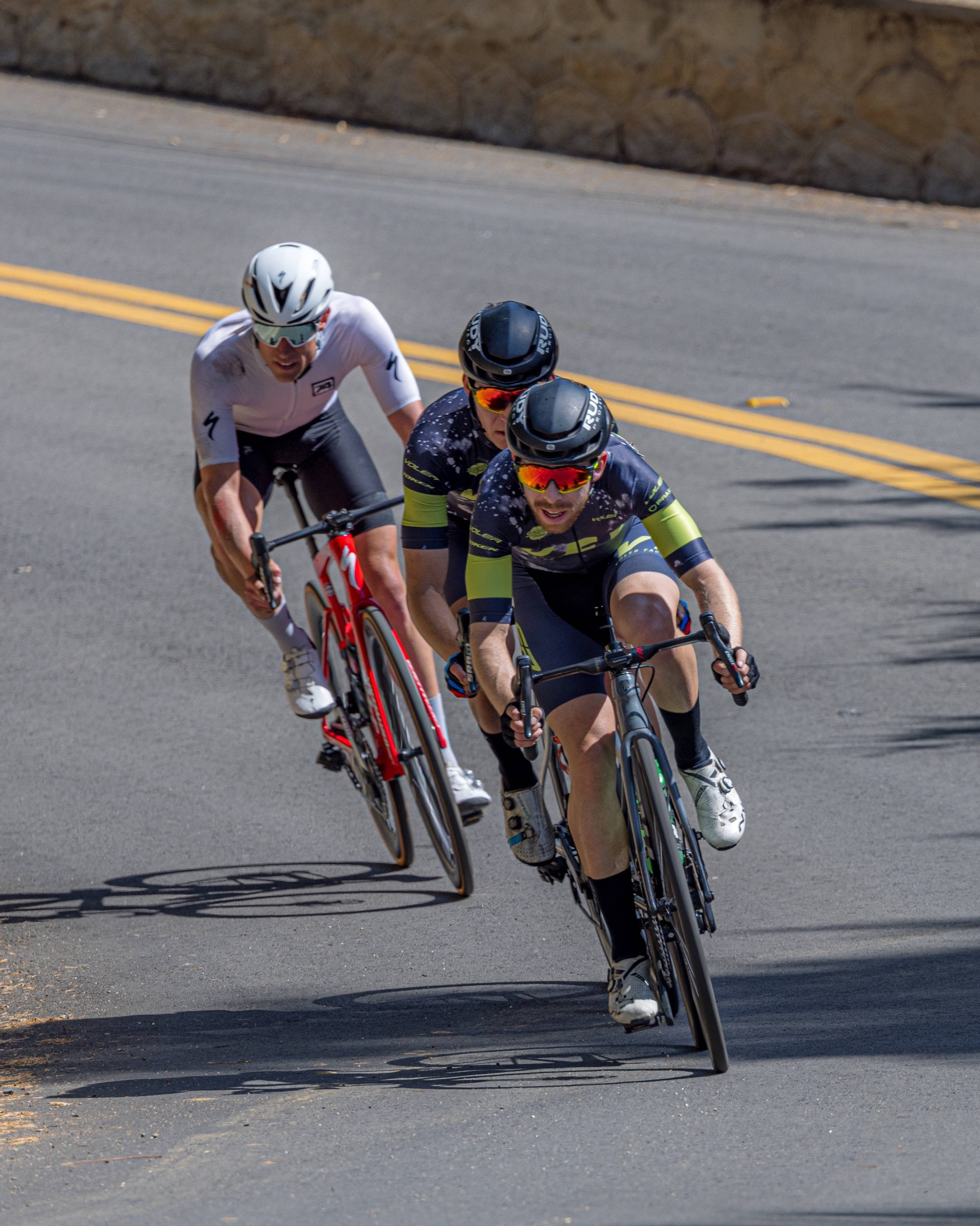 An hour later, I noticed that everyone was relying on the yellow jersey too much, and I sensed that a crack was coming soon. When I saw Tyler Stites (2nd in GC) attack along with another rider who was 2nd on the Oak Glen stage and also sitting high up in the GC standings, it seemed like a move I could not afford to miss. The yellow jersey was isolated with no teammates at that point. A 3 rider move was not enough to make everyone else panic, so I went as deep as I possibly could to catch the two riders. When I caught them, I was able to sit on and not take any pulls because 1) John was up the road and 2) I was 2 minutes down in GC, so this was their race to lose. The three of us eventually reached the 9-man breakaway on the final sunset circuit. I was relieved to hear “DAVI COOOOOLE” (a nickname/joke between John and I that started at the Vuelta Independencia earlier this year).

I had a couple thoughts going through my head at that point, but the positive one was that John must be feeling pretty good and seems to be having a lot more fun than me at this point in the race. The group of us stuck together and entered the criterium laps together. Shortly after that, a rider from Aevolo found himself with a gap and committed to the effort. John and I were both on our limits at that point and opted to not chase. Sometimes in bike racing, you need to be willing to lose a race to have a chance to win it. A couple laps later, John’s fatigue became clear when he reached for some food and ended up overlapping wheels and getting sent to the ground.

When the group saw two laps to go I decided to go on a desperation flier. I knew that closing 17 seconds was unlikely but I had to try. The Aevolo rider (Jared Scott) held on to win the stage and I came home 2nd. 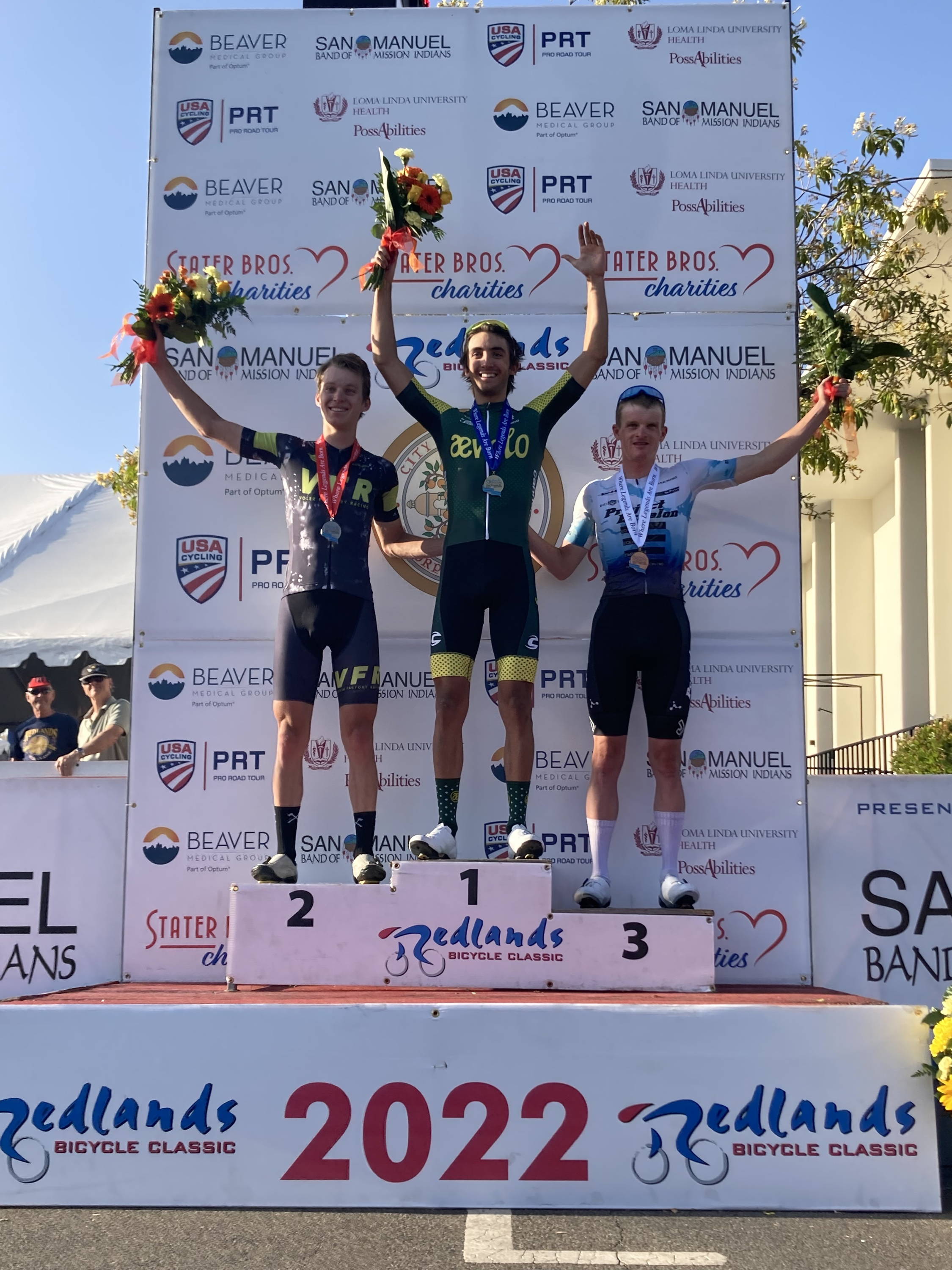 I felt a whirlwind of emotions. One hour into this stage, I would have been happy just to finish. Afterward, I was disappointed not to win. This sport is unlike any other, and I think that is what makes it so beautiful. Despite being frustrated about how things played out at the start, I am incredibly proud of how we rode as a team on this stage. We set a plan and executed it, which is not an easy thing to do. The team wrapped up the week 3rd on team GC and I finished up 5th overall thanks to the help and support of my teammates. We left with our heads held high.

When I reflect on the week, many memories stand out, but the best ones come from the moments spent off the bike. Between our team dinners and Mario Kart championships with our incredible host family, we had so much fun and never stopped laughing. I love these guys.

P.S. John is ok after his crash. I’m pretty sure the guy doesn’t feel pain. I’ve seen him crash twice now, and he laughed it off both times. Not to mention he does 10+ hour gravel races for “fun.” 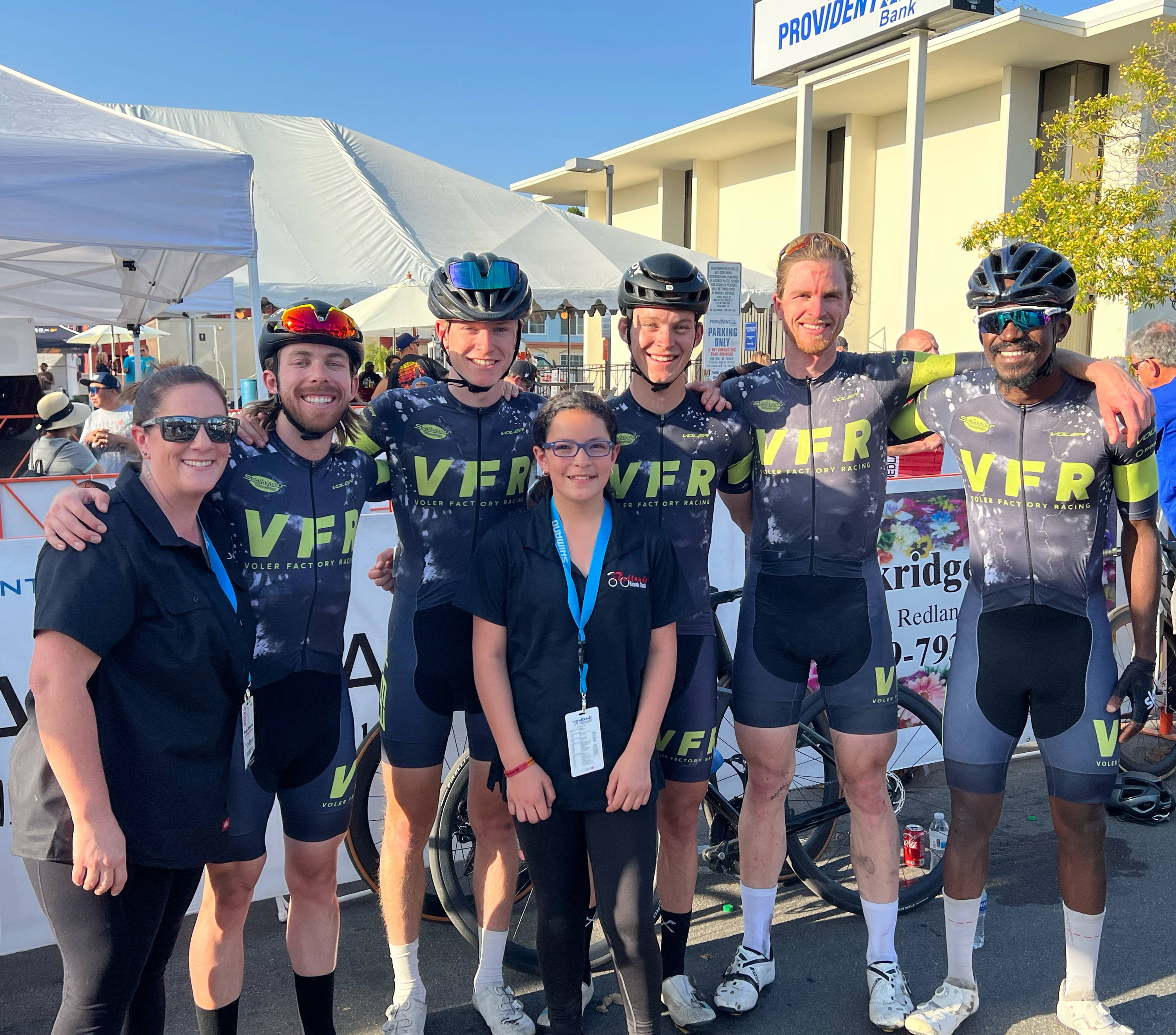