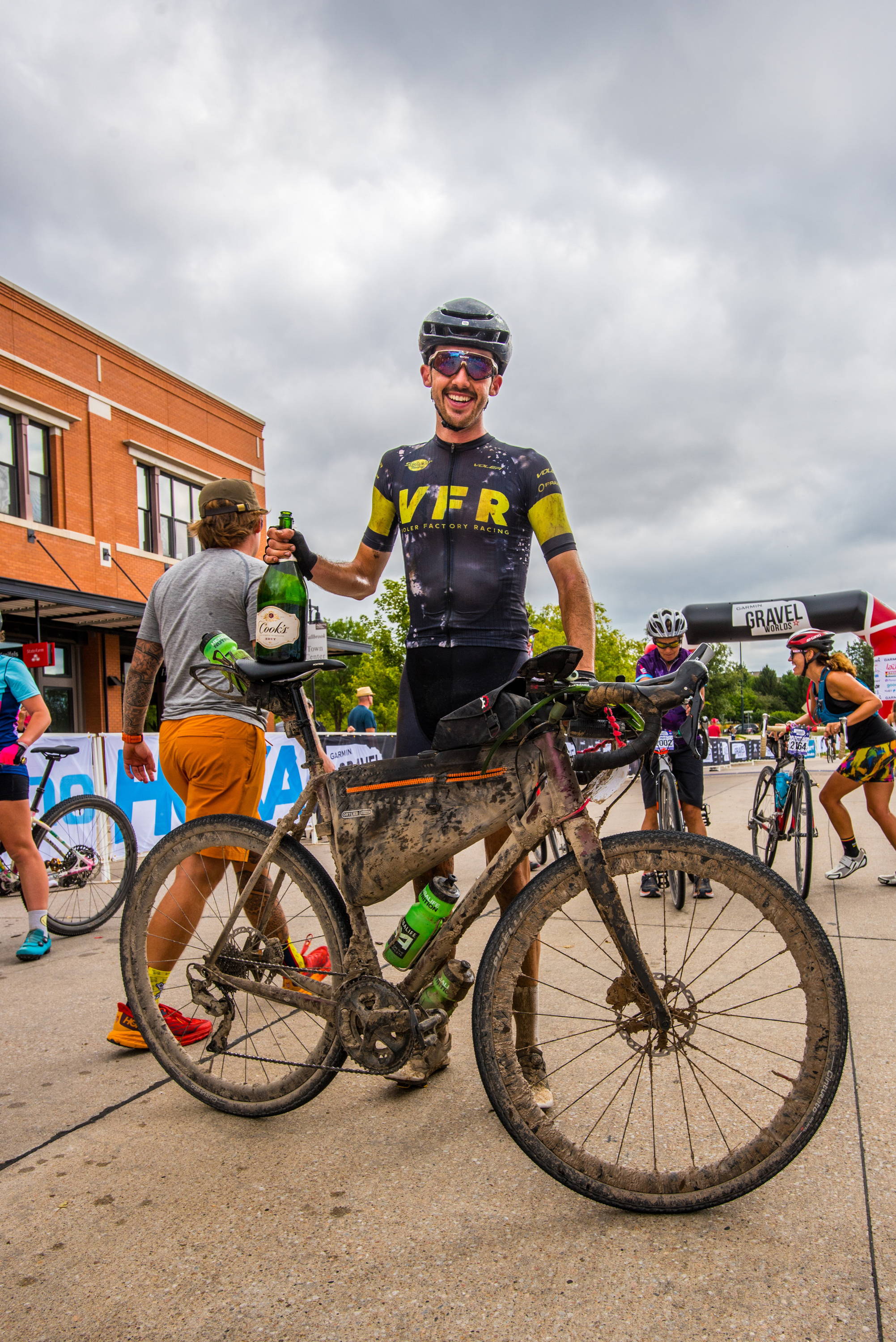 VFR rider Colin Patterson tackled the ultra-enurance Long Voyage at Gravel Worlds in Lincoln, Nebraska. Here is how it all went down, in his words.

I have a solid history of doing long and stupid rides, usually with little to no preparation. Examples of my previous adventure include trying to break the Everesting record before that became popular or, less than a day before the ride, deciding to go for the world record of most elevation climbed in 24 hours. In light of my previous spontaneity, deciding to do the Gravel Worlds Long Voyage several months out was already a win for me. It also left me with really high expectations even though I didn’t know what to expect from a 300-mile self-supported ride.

After driving for three days in a row, Lauren and I finally made it to Lincoln from California. On Thursday we checked out the venue and hung out with Brad at the Voler tent. It was a relaxed but enthusiastic atmosphere. Riders and runners were everywhere checking out the booths and chatting about how they thought their ride would go or how the gravel was riding. After going out for a spin myself, I learned that Nebraska gravel is fast but can surprise you with deep pea gravel or mud. I was praying that there’d be no rain as my road shoes would likely fare poorly in the mud. Also, contrary to popular belief, Nebraska is definitely not flat. Endless rollers as far as the eye can see make for a substantial amount of elevation per mile ridden. We hit the hotel early on Thursday as Lauren was running the 50k at 6 am.

Friday was race day for both of us. As Lauren set out for her run in the dark, with her Wahoo glued to her cast, I got a number of surprising looks and questions when people found out I was doing the Long Voyage later that day and was awake before the sun was up. Immediately after I saw Lauren off, I went back to sleep for a few hours, did my final preparations on the bike and then went back to watch Lauren finish in an impressive five and a half hours, all on gravel and with 2,000 feet of climbing. After a recovery Quarter Pounder and Diet Coke, we went back to the hotel to discuss race tactics and nutrition planning.

My nutrition goal was to eat a date bar or half a fig bar package every 30-45 minutes and drink a bottle of Herbalife CR7 every hour. It was an ambitious goal, but I practiced that a few times knowing it gets real hard to eat that much that fast, especially when it is hot. I figured trying to get more solid food early was for the best. My plan included stopping at just three rest stops or gas stations. I would start with four bottles of mix and a two liter bladder of water in my frame bag, only drinking from the bottles for the first few hours and stopping at the gas station at mile 52. That stop would be a little early, but I figured I’d save time by not needing to fill the bladder twice during the race. 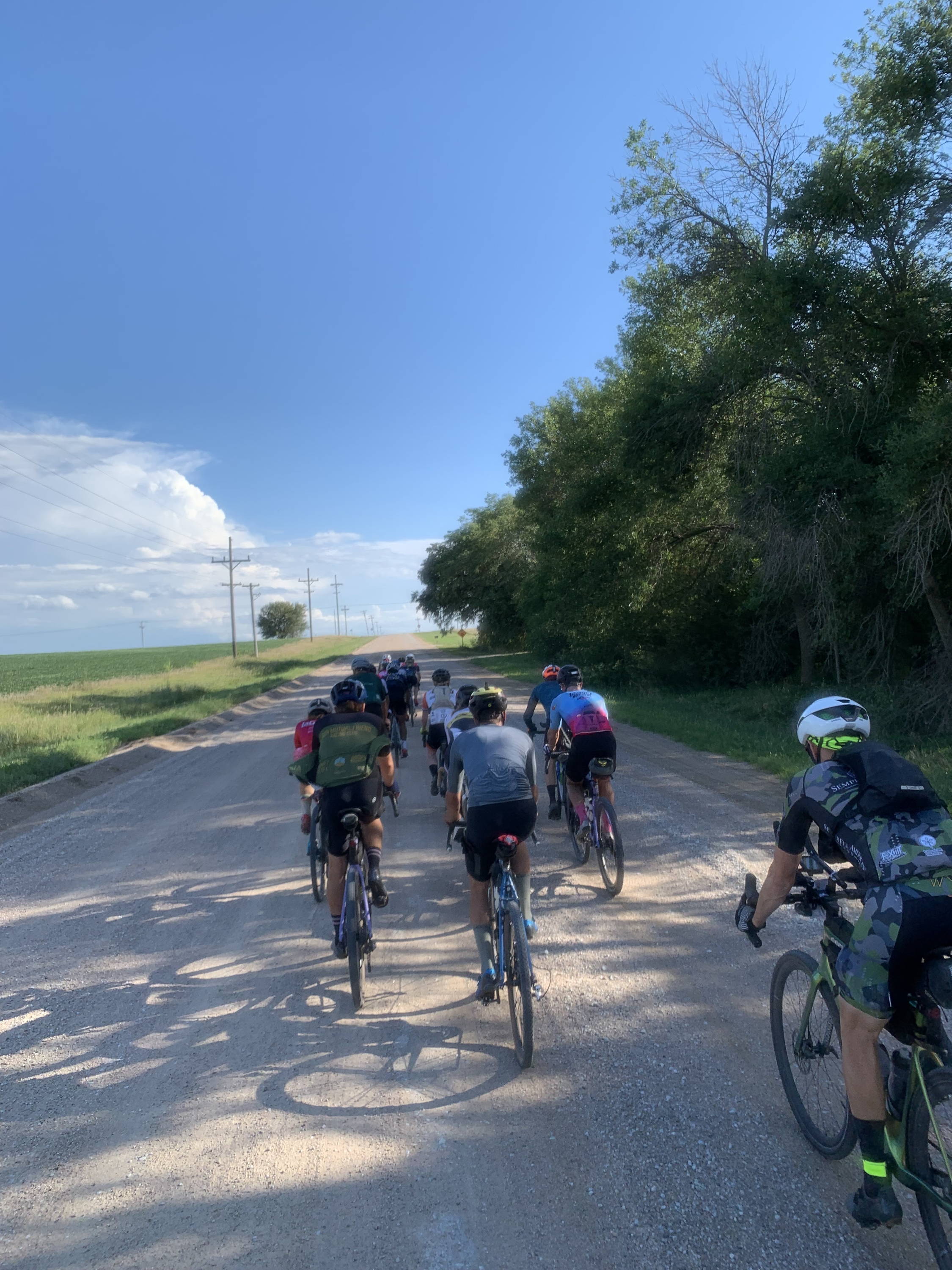 On the day, the pace never got super high though we did hit a few hills a little hard. We got to the gas station at 52 miles with about 15 people. I stopped there with two others, we all filled up and were back on the road in about 3.5 minutes. After rolling to the end of town I decided that we were not going the pace that I wanted so I decided to ride on without them to hopefully bridge that three plus minute gap. During the resulting 16 mile chase I kept thinking to myself “this is a bad idea, I am going too hard right now.” But just as it got dark, around mile 67, I made it up to that front group. 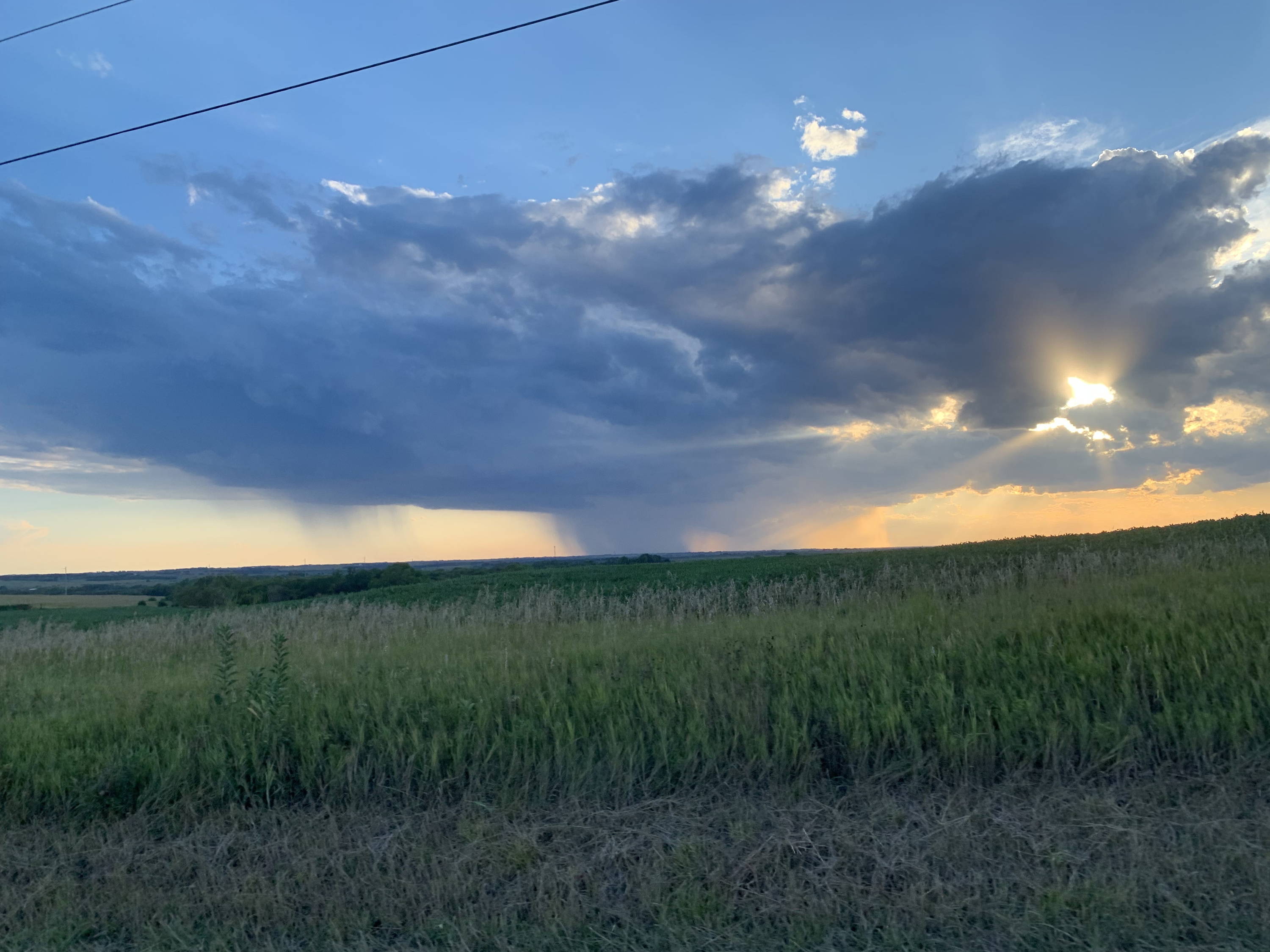 Coming up to the next aid station at mile 81 it sounded like everyone was going to stop there because the next gas station that was directly on course was at mile 156, which would have been too far for anyone who hadn’t refilled yet. Even I was thinking that was potentially too far for what I had with me, but I was committed. We hit the aid station and one other continued with me. In a perfect world, we would have worked together and gotten a good gap as the others trickled out of the aid station. Unfortunately, the cloud system that had been ahead of us shooting lighting every few minutes had left its mark. A half mile later we hit the peanut butter mud and there was no chance of riding through it. Instantly my bike doubled in weight and I could not even push it because of the mud build-up. Knowing that everyone would also have to go through it helped but I started to panic as I was just not strong enough to pick up my bike and carry it. After struggling a bit, I got it off to the side in the grass and managed to roll it, gradually cleaning the tires a little. Maybe a quarter of a mile later we were out, and stopped to clean the bike a little. A couple people caught up to us who maybe had slightly better luck with the mud. I decided to use this as an opportunity to push on hoping the group would be shattered enough to not put together a good chase. Despite my upper body being wrecked from the mud, I dug into a good pace, got small on the aero bars, and pedaled onward into the dark.

What I think was mainly a tailwind definitely helped. Some people wonder if it is hard riding through the night for this long, but I find it goes by faster. After almost missing a few turns and dropping one of my bottles out of my bottle cage behind my seat (somehow I must have broken it in the mud) I made it to the halfway gas station at mile 156. After being alone my goal was to get there with enough time to get everything refueled before the next person showed up. I think I got out of there within 10 minutes with more solid food, full bottles, and the hydration bladder topped off. As I was rolling into that station my stomach was starting to take a turn for the worse as it just felt too full to eat, so I did not buy as many bars as I originally planned.

I pulled out of town and started the journey back north. The middle third of the course was the flattest section, a lot of which was on a gravel multi-use path which made it a lot easier on the legs and allowed me to keep my speed up. I would push slightly harder on the uphills and then ease up a bit on the downhills while getting as small and aerodynamic as I could. By the time I got to the third gas station at mile 223 I was quite behind on my eating and drinking. My stomach was not doing great with the amount I needed to consume, so I decided to go in and get whatever sounded at least a little appealing. Three cokes and a big bag of gummy worms sounded likt the best option, so I quickly purchased them and then and took off again. The coke and worms hit the spot, and I felt energized again even with rationing them.

Sunrise was beautiful. It was a sign of hope, and I knew I was almost done. It had been a long time alone so I was ready to see people again. This last 50-70 mile section felt like the hilliest and steepest part. To top it off, the headwind was a nice reminder that this was far from over. I knew I had a decent gap still but was scared I could lose it quickly if I wasn't careful. After coating my bike with a few pounds of mud, I was too scared to try and shift into the little ring. I had know idea whether the chain would make it back up to the small chainring, let alone back up to the big ring. This left me grinding up many of the hills in a bigger gear than I would have preferred.

Eventually I made it onto the course of the 150 and 75 milers in the opposite direction and started seeing other riders. I got a little emotional seeing them and hearing them chear for me (or tell me that I was going the wrong way). At one point I had to stop to feed myself and then I made it to the checkpoint and forced down a bag of chips. I was starting to crack but a volunteer there told me I still had a few miles on the chasers. Making the next turn towards town could not have felt better; I had a tailwind behind me and I was on the home stretch. From there it was primarily downhill and I had company in the opposite direction nearly the entire way.

With 6-7 miles to go, I arrived at a part of the course that I had checked out before so I knew there was only one hill left. Just in case, I stopped at the last aid station and grabbed another bag of chips. I was passing people finishing the 75 miler and I was feeling incredible knowing I’d be able to celebrate with friends at the finish line until I hit the last hill with about a mile to go and cracked completely. I had to come to a stop about half way up and lean over my bike for a couple minutes before I could force feed myself. Probably five or so minutes later I was pedaling again. I made it onto the pavement–the sweet, sweet pavement–and coasted the downhill half mile to the line. 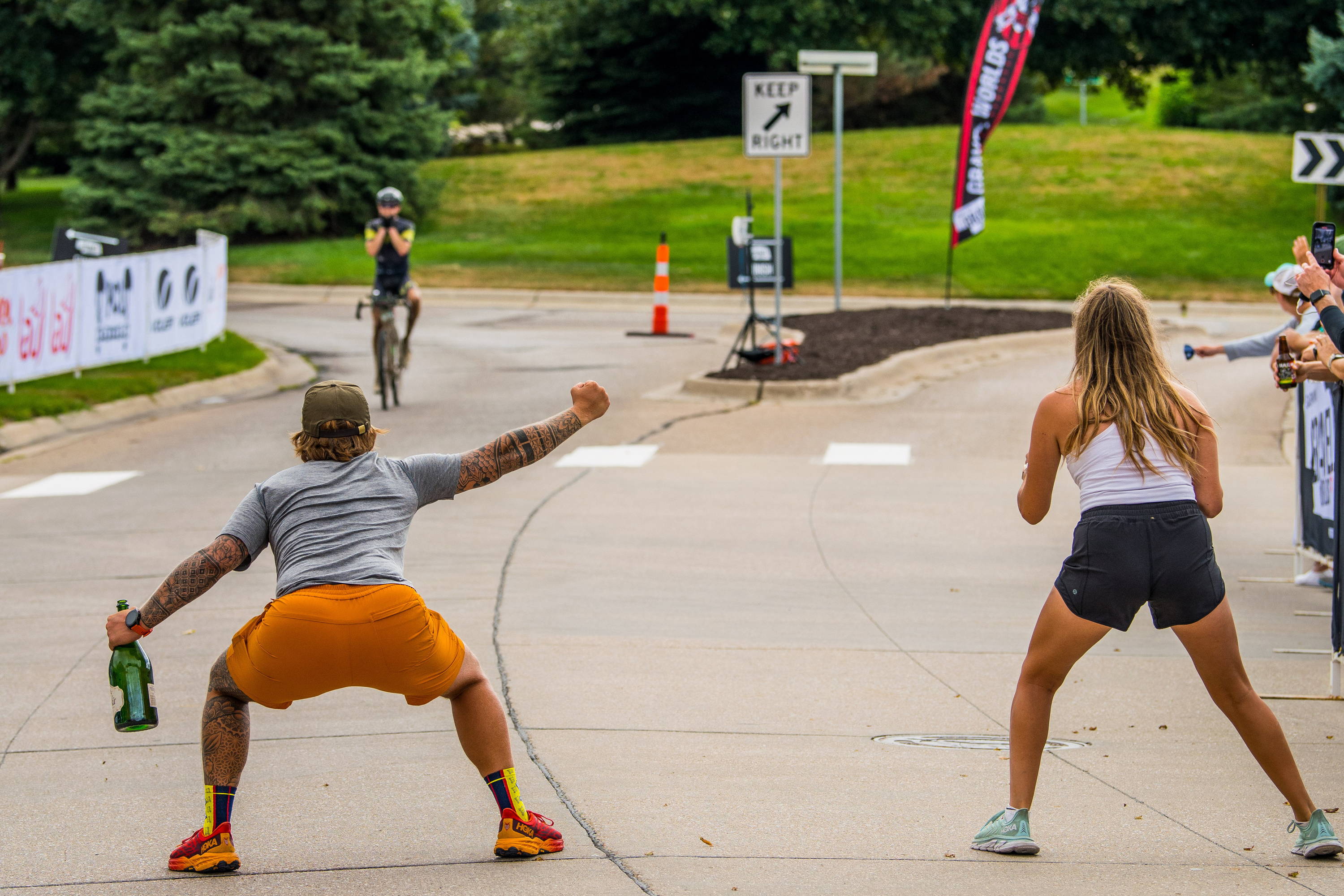 I still couldn’t quite believe I had done it after spending such a long time alone, but I was welcomed by Lauren at the line and two of the most friendly gravel enthusiasts out there, Jason and Sophia of The Pirate Cycling League. There were champagne showers and hugs all around as I slowly climbed off my bike, knees feeling crunchier than ever. All the other staff there were incredible in making sure I was taken care of afterwards, getting me food, drinks and even a shower. The win was incredible and I am extremely thankful to everyone who helped me get here, but even without all that the way the event is run and set up is something that everyone should come check out. Gravel Worlds is one big family and that is made clear to everyone. I’ll be back, maybe for a shorter ride, but I’ll be back. 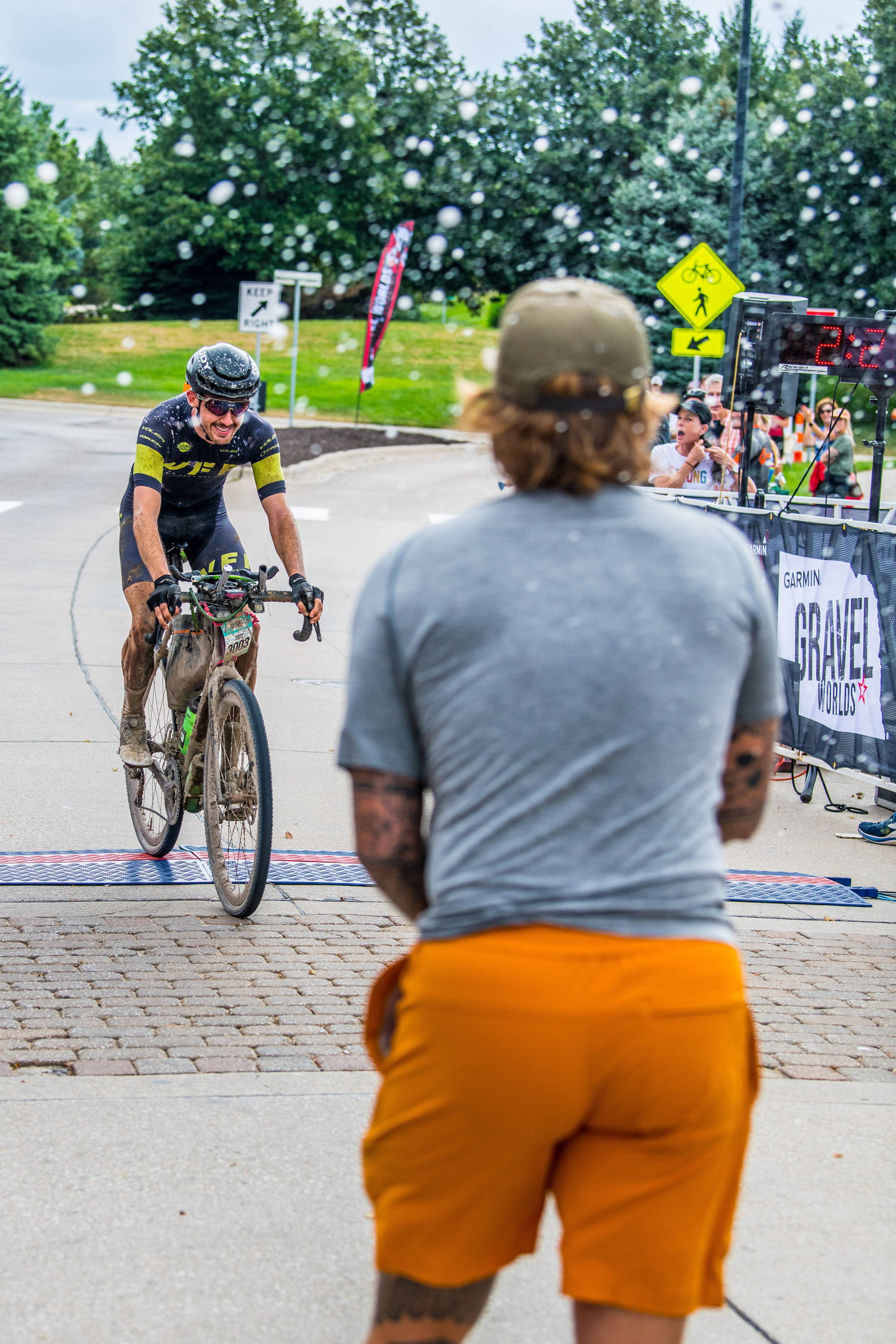 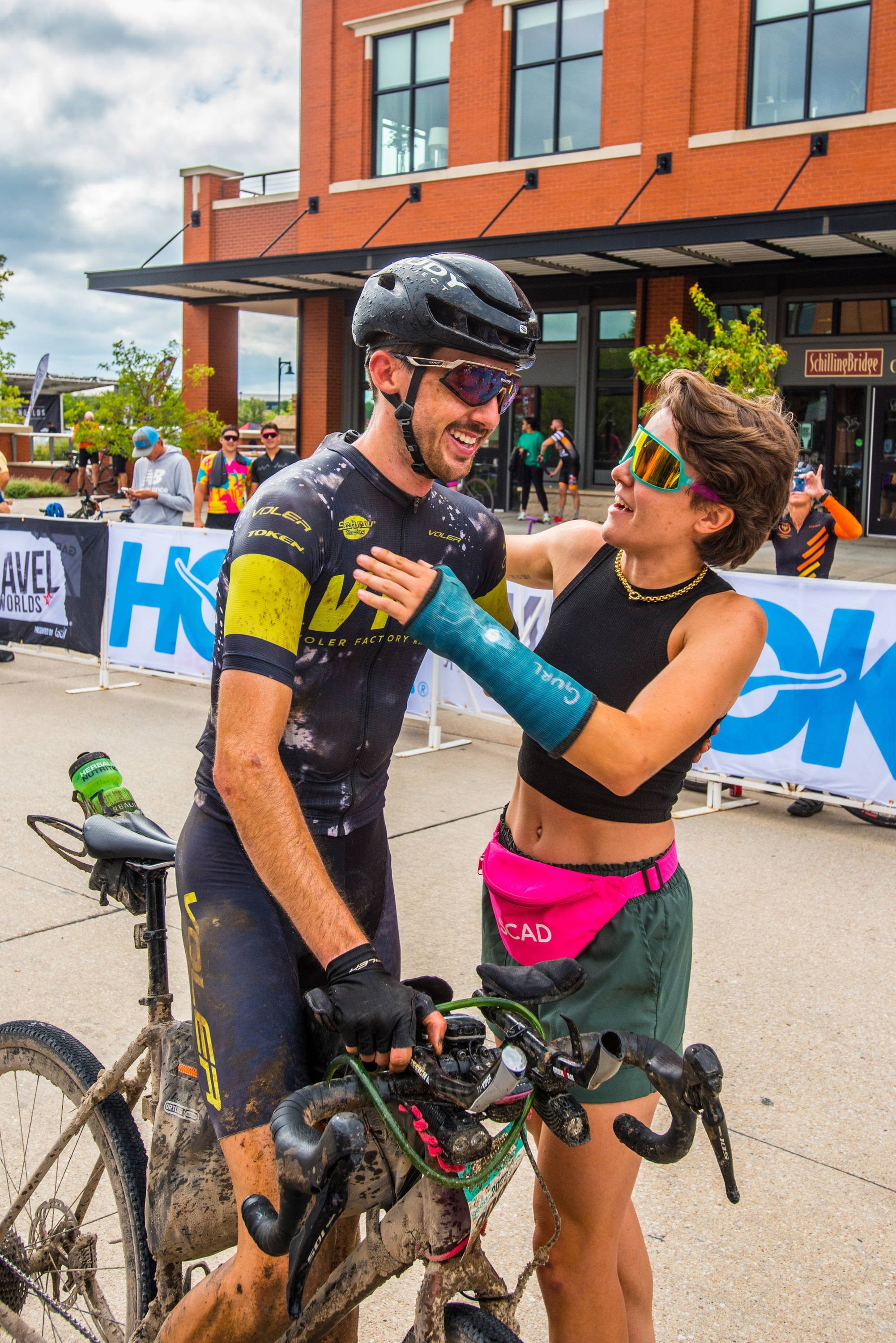